Facebookvisit our FB page
Instagramfollow us
0800 FINNSAUNAGive us a call
info@finnsauna.co.nzSend us an email

Renewal of Sauna and Steam Room for a Community Facility

Saunas and steam rooms are a major draw for people looking to soothe muscles after a workout, lose weight, heal the body, remove toxins or simply relax after a long day. In 2017, the Hamilton City Council’s Waterworld, a full-service health and wellness facility, contracted FinnSauna for a two-stage project of renewal of their existing sauna and steam room amenities.

The renewal works for the sauna and steam room at Waterworld was described as follows in a Council news report, 27 September 2017:

The Waterworld sauna project involved a full refurbishment. Among the many improvements made to the sauna during the renewal, the following are worth noting:

This project required a full refurbishment of the existing steam room.

The steam room’s ceiling, walls and benches are lined with attractive two-tone Italian glass mosaic tiles of the highest quality. Fibre optic lighting embedded in the curved ceiling creates a relaxing ambience. Forced mechanical ventilation is installed to provide airflow, even temperature and vapour distribution in the steam room. A large, horizontal window at the top of the back wall allows in soft, natural light. The glass door provides additional light as well as security for mixed bathing.

The sixth image below is a 3D rendition of the design for the steam room. 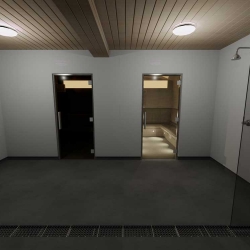 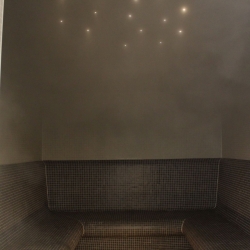 Give us a call to discuss your next Sauna Build, Maintenance or to buy Sauna Accessories